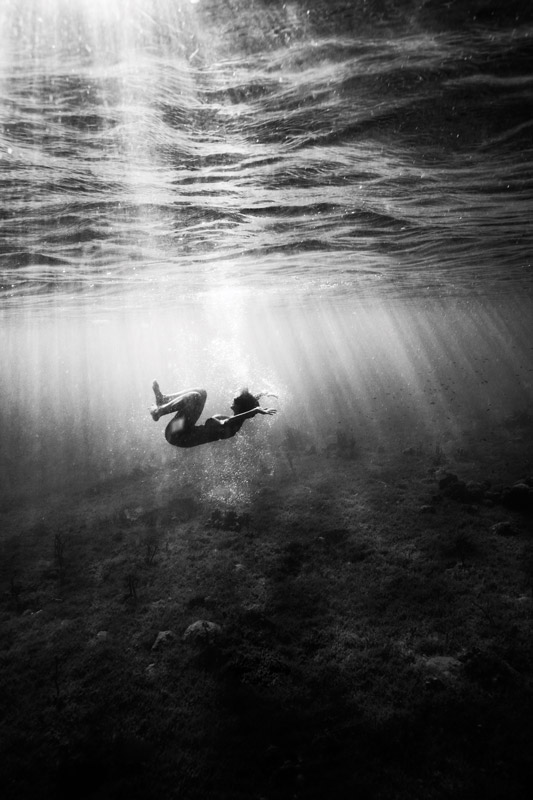 Meaghan Ogilvie’s work focuses on our relationship to nature and where we find ourselves within that relationship during a period of rapid ecological change.

For twelve years Ogilvie has been practicing underwater photography, experiencing the physical, spiritual and emotional impacts it gives. Her fascination with nature being at the forefront of the work, leading onto investigating the importance it has for us. This response has lead Ogilvie to photograph many underwater scenes depicting the strength or fragility of humans in nature, in search of a greater connection.

What makes Ogilvie’s work effective is the use of light and the shapes formed by the human subjects in the photos. Many photos are in black and white but help to focus on the shape of the human body, comparing the acceptance of nature and the struggle of adapting. The individual is overwhelmed by the surrounding underwater landscape presenting an external perspective for the viewer. This perspective is more about reading a story than experiencing the landscape from the subject. From the top photo included in this post, I read of a human controlled by nature’s grasp, presenting an escape hinted by the light shafts, but in limbo in-between the dark and light of nature. This could be interpreted as a physical struggle but one is not visually shown, so I interpret it as a psychological process, accepting nature even with a clear escape available.

Ogilvie’s work regularly encapsulates the human in an unfamiliar landscape, regularly looking like a dreamscape from another world. They evoke serenity within the world, capturing the natural aspects of waters seamless interaction with the subject, seemingly levitating in its grasp. Yet the poses suggest a certain fragility of humans interaction with nature, curled up or struggling from an invisible threat. That threat could be the realisation of our disconnection to nature and the impact it has on us physically and emotionally. Or an interpretation of nature through the human subject, as we don’t know what a cowering ocean looks like, representing through a human is the most familiar to us. This shows a story of natures current state within this anthropocene. Through a human figure, it allows the viewer to understand the threat to nature in a more familiar visual approach.