Oxfam A Your street and climate change:

I have a brief description of the project consisting of 4 lines of text but being able to persuade people for why I’m creating this work is in progress. To create a small piece of text that informs and inspires others.

Physical photos when completed depend on where they’re being shown and how, these would work well in frames but could also be projected onto something. Frames would give the clarity needed as the images are printed to a size depending on the scene I could adjust on scale of prints and orientation e.g. waterfalls being portrait to create the falling effect. Projecting has it’s issues with other light interfering with the projection but could be more effective in different locations other than the gallery. For this project targeting the audience who’ve kept water’s abilities unknown with the projection (urban offices) could be most effective than a rural area. I’m unknown about how effective laminar flow would be until tried, still need to create the right images before showing and adjust the scale of the flow to suit each scene.

As for videos I’m 50/50 on whether it’s best shown at an exhibition or online, exhibition means I can  control a lot of variables for viewing but a smaller audience, especially if I’m looking at VR. Showing online would be simpler and have a much larger audience but the viewing experience could be easily neglected. The Franklin Institute launched their VR experiences in 2016 calling it “The Year of VR” and the use in museums aims to bring collections to life saying VR is an excellent tool for this. VR places the user inside an experience and that is what water and waterfalls are, it’s an experience to create clarity and to slow time. Using this relatively new technology could also influence the younger generation to become involved as well.

Nils Pokel from the Aukland War Memorial Museum said that “VR adds value when used in conjunction with a curator’s existing tools”. So creating an VR exhibition would need to be supported or supporting a physical body of work, either as framed photos, text, or another interactive piece. VR does have its disadvantages though ranging from broken headsets, escalating costs, design costs and hygiene of the headsets.

It would provide an immersive experience and the content would include a 180 or larger degree video or image with the surround audio to accompany it to include further human senses. There’s the possibility of just using one video per VR headset or the whole timeline played in each headset.

Laminar flow would give the opportunity to add the element I’m working with physically into the viewing experience, it also has an interactive component to it where people can touch and feel the water flow as if a waterfall. Having the photo either behind protected in a frame and laminate or projecting it onto the flow is just like in the VR experience, it adds to the existing viewing experience. There’s also the sound of falling and flowing water but creating a setup that has a low noise emission, works effectively and efficiently without removing anything from the visual theme is the main task. I could always create the flow in VR with a physics engine if the task is too prolonged.

I’ve briefly explored taking videos of/in the waterfalls and when combined with the right music it has a very peaceful atmosphere to it. Quite a lot of my inspiration has come from Ryan Pernofski’s work with waves and light, and a short film on Trent Mitchell. Pernofski’s work just reading from the comments shares a beautiful and peaceful nature, with the included heavenly music it creates an inspiring and emotional connection made over 2 years. The short film called ‘Black Water’ is about Trent Mitchells latest project ‘Inner Atlas’ with portraits of wavesurfers flowing with the waves, “celebrating the human spirit through movements of the sea in an unfamiliar and forgotten space” 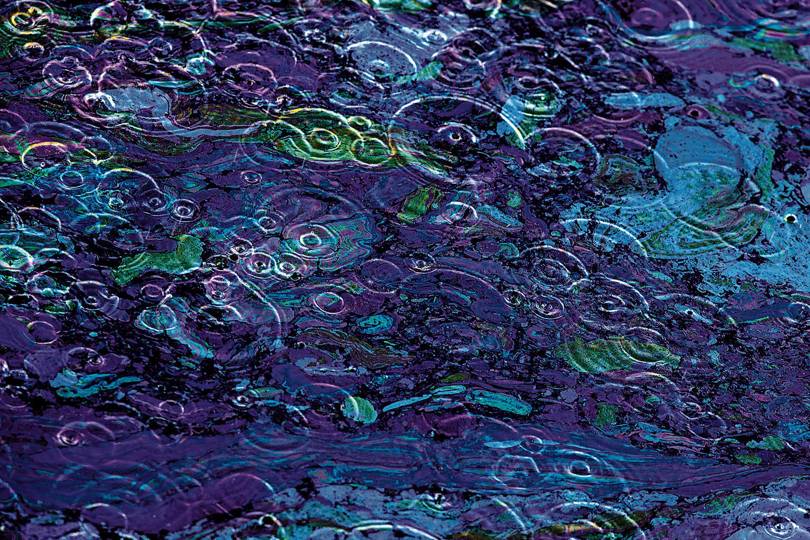 Elisabeth Hoff created a project called ‘Drowning in Plastic’ supporting societies and charities cleaning up plastic. The project is a representation of the wildlife in our oceans, raising the fact that by 2050 there could be more plastic in the ocean than fish.

Hoff is a fashion photographer and that shows through the images with the use of artificial lighting and nude models, as a landscape photographer my approach would be different. Bringing the issue to each person would be the main task, Hoff used people in her photos to include the viewer, using our drinking water supply could be a method to bring the issue into our homes.

Currently the theme is split up into many different styles, some are more detailed, some are more abstract but I wish to focus on one area. With the changing conditions it is difficult to recreate the same theme if there are gaps in my shoots, I’ve planned to shoot over a 2-week period so hopefully this will cure one problem. The next problem is creating a visual theme that I’m happy will sure the right purpose for the project, the last projects I’ve tried many different themes to refine them down. Showing the raw beauty of nature like in Ryan Pernofski’s video of waves I believe is one avenue for creating a mental connection between people and nature. Looking at the comments from Pernofski’s video and the short film about Trent Mitchell gave me an insight, this insight showed how people would react to that style of video. Photos and videos are two very different things so maybe the part that is missing from this project is a video. What I’ll try to do is post one of my waterfall photos from PHO703 onto a sub section of reddit to see what feedback I can get, this way I can compare the comments from the videos to the comments of photos and see which gains the most interaction.

Arnold Bocklin’s artwork was influenced by Romanticism and used imagery from mythology and legends with different aesthetics. The use of different weather and lighting highlighted the moods Bocklin wanted to convey, death was usually a dark cloudy day and life a lightly clouded blue sky. ‘Das Irrlicht’ is a painting about ‘Will o’ the Wisps’ which takes part in an Autumn scene with a sunset peaking above a waterfall between trees and a ghostly figure in the waterfall with a curious person following it. ‘Will o’ the Wisps’ is an atmospheric light seen by travellers at night enticing travellers to follow it. I could relate this phenomenon to my project of enticing people to follow the natural healing of water and explore it further themselves. As for the visuals ‘Das Irrlicht’ pulls on folklore to create the scene, occurring when light is fading around water, but then the Romanticism aspects of it being in Autumn with many orange and red colours of the trees blending with the sunset. It’s an easy to look at painting and I’d like to convey that idea onto my work, it may enhance the idea and make the images more pleasing to view if everything blends together.

Spirituality in photography, showing something felt rather than seen is still an ongoing investigation as to how to show this.

Explore one theme in depth (spirituality, scientific, mental health, sustainability) alongside the immersive quality of the work and the desire to be with water and experience all its senses to give more structure.

With science and sustainability:

Work with immersion in photography and presentation of work.

Videography would be easier to show the flow of water and the immersion into the waterfall in one scene showing two different worlds. Could be shown in two different photos which I still will do.