Boomoon’ ‘Skogar’ series of 300 photos centers around the waterfall Skogar Falls. Boomoon describes the project as “the encounter between the horizontal and the vertical axes and everything that happens in between”. The series all has the same perspective, two thirds falling water and the bottom third the horizon. Each photo is cropped to avoid any identity of a sense of scale and unnecessary details, this aids in the creation of the illusion of ever-flowing water. ‘Skogar’ resonates with my work as they’re both focused around waterfalls and the immersion into that world but also the mythical and hidden features they can show.

How is this mythical illusion created? Poet and critic Shino Kuraishi believes the minimal waterfalls dispense with continuity or a sense of passage between past and future, he says “The destination of the end of time is permanently postponed. The waterfall keeps falling self-recursively, aimlessly, and meaninglessly carrying the undetermined present. The waterfalls descend defying associations of any other place and any other time”. The visual trope presented corresponds with this message, all 300 photos have no identity of time through various levels of light or flow of water. Also the fact that waterfalls have little control over the falling waters direction, sections are falling faster than others and aren’t moving directly downwards due to rock formations and plant growth. “carrying the under determined present” could relate to water being the foundation of life and ‘Skogar’ being the mass movement of the “present”. Considering an alternative theory, why wouldn’t it also be thought as the future? Water has a use on many rivers, it provides for industry, agriculture and domestic needs so ‘Skogar’ would show a transport to the future.

The creation of 300 plus photos for this project reinforces the idea to the viewer. For example, comparing to other projects that include man-made structures on a landscape, that tells a story of time of that landscape where the natural has been removed to build a structure. ‘Skogar’ has no evidence of change or difference in time, it embodies the stopping of time in photography. Henri Cartier-Bression talked about “the decisive moment” in photography as creating a photo at a significant moment in time in unison with the composition and form.  The significance of “the decisive moment” in ‘Skogar’ belongs to the effects created by the photos, the decisive moment has been twisted and stretched to create a moment that extends for an infinite amount of time. That moment though could also be thought to be removed entirely, where a waterfall is ever-flowing, each photo created is very similar from the last visually but to convey Boomoon’s idea across the creation of many photos provides added evidence to support the theory.

Recently looking into the intertextual features of ‘Skogar’ and oil paintings by Caspar David Friedrich and his ‘Wanderer above the sea of fog’, a similarity between the two artists can be seen, where each piece can be related to the Romanticism movement and the sublime. I see ‘Skogar’ as a celebration of nature and stands to create a more mental response than visual, this links to Romanticism’s characteristics to show a vision of past natures glory. A difference between the two artists consists of Boomoon working around the idea of eternal time or ever flowing, whereas, Friedrich worked many times with landscapes and silhouettes of a person, conveying a subjective response to his experience of the natural world. Critic Shino Kuraishi says about ‘Skogar’s characteristics as “The destination or the end of time is permanently postponed. The waterfall keeps falling self-recursively, aimlessly, and meaninglessly carrying the undetermined present. The waterfall descends defying associations of any other place and any other time…The falling waterfall declares my freedom. “I” facing the waterfall am free”.

Reading back on a previous post of mine saying “5 hours feels like 5 minutes”, this removal of time in a photo and place is an interesting idea to incorporate into my project. This ever flowing could be described as the magic of waterfalls and water, one of the few places that can remove time. This could be a technical method for showing visually the spiritual road, how the road is always busy and moving. 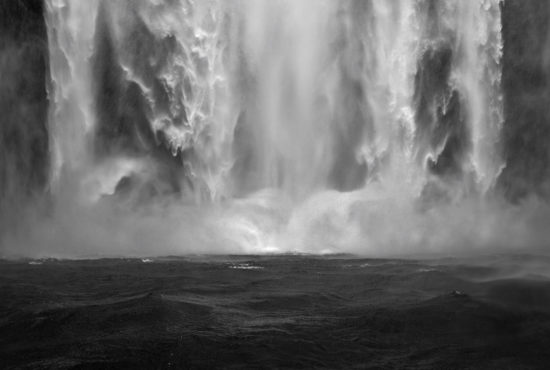